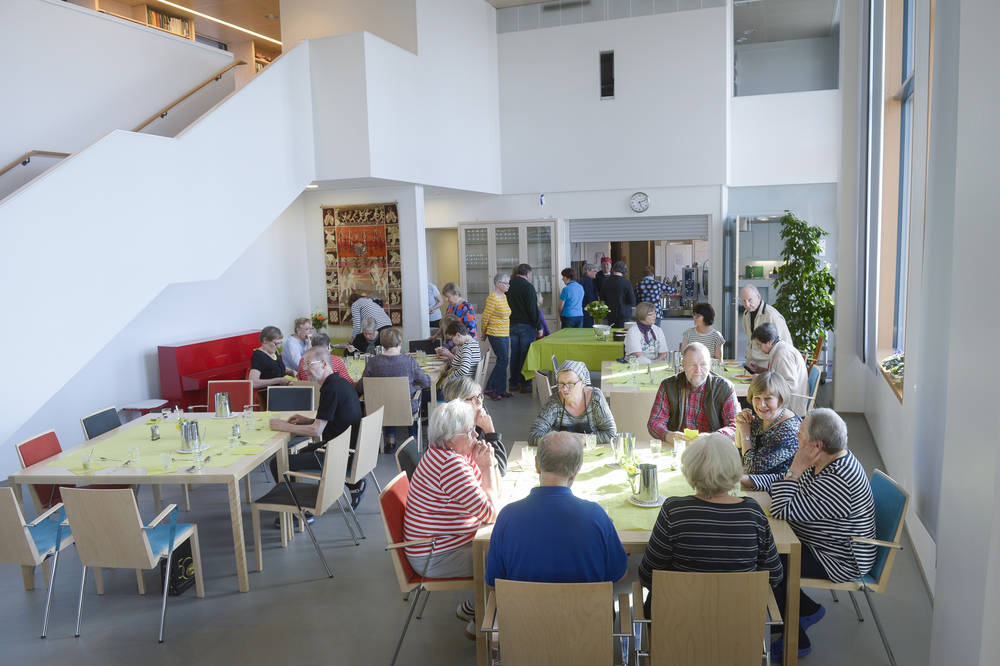 Kotisatama is a housing community for mid-life and elderly people in urban surroundings in Helsinki. The community occupies a nine story building with 63 flats and circa 500 sq. metres of common area including a spacious roof terraces and two smaller terraces on the 8. and 7. floors. There are two main entrances and staircases both equipped with a lift capable of carrying 8 persons.

Kotisatama property is owned by a private housing corporation (Asunto Oy Helsingin Kotisatama) whose shareholders form the majority of the members of the community. The minimum age of 48 years is required of at least one person in each flat. The homes are of 38,5 to 77,5 sq. metres, they all have good facilities for cooking, a bathroom and a balcony.

The construction of the building was started in November 2013, and was completed in June 2015. The planning phase and architectural designing had begun three years earlier to allow the future residents to get involved and decide on the layout of the plan, the room division, the materials and other details. During the co-designing phase people had an opportunity to profound discussions with the architects.

In addition to co-designing their own flats, the residents played an important part in designing the common area. The ground floor and the second and ninth floors are mainly for common use. The community kitchen, the dining room, the hobby room and two shelters for bikes are downstairs. The library, the office, the laundry and a guest room are on the second floor. The top floor is for recreation, there are two saunas, an exercise room combined with a multipurpose sitting room with a fireplace. In warm season the roof terrace is popular for leisure and small gatherings.

The location of Kotisatama is Kalasatama, a new housing area in Helsinki is set in an old harbor and industrial milieu. A bran new bridge for walking and biking combines Kalasatama to the island of Mustikkamaa, a recreational area with the paths and lanes for walking.

The Kotisatama community is a well liked partner to the students in their various research projects on housing and ageing. The public transport services are excellent, the city centre as well as the eastern part of the city can be reached by metro and buses.

The second of its kind in Finland

Kotisatama is the outcome of a six year project of The Active Seniors Association. The association was founded in August 2000 to introduce the concept of a housing community for elderly people, in similar lines with the Färdknäppen community in Stockholm. The first house of this kind is Loppukiri (2006) in Arabianranta, about three kilometres north from Kotisatama.

The Finns are one of the fastest greying nations in the world. The care for the elderly was, more or less, the responsibility of the society in the past two or three decades, but since the economic depression in 1990s there have been cuts in the social services while the number of senior citizens is increasing. The half a dozen women who founded the association had seen and faced themselves the problems in arranging care for their relatives. They wanted to take the initiative in their own hands, started to promote the idea and got an eager response.

The housing corporation is run by a management board assisted by a professional property manager. The owners of the flats, the shareholders, stand for the managing cost and expenses according to the number of the shares he/she owns in the corporation. The votes in the annual general meeting of the corporation are based on the number of the shares. The flats may be owner occupied or rented out. The minimum age of at least one person in the flat is 48 years, and the occupants are expected to participate in the community life.

The Kotisatama community consists of the residents of the building. The community provides and enjoys a lively social life offering a choice for everyone to pick from according to one’s own interests. It is a dear duty to everybody to look after the common home, to keep it clean and pleasant. Only the purely technical maintenance is trusted to an outsider. A common meal is served Monday to Friday at five o’clock, except for the three summer months. Cooking together and sharing the meals are the most important and appreciated events, well liked by those who are on duty and those who enjoy the outcome. A week’s working shift comes for each group of 12-13 persons once in six weeks.

Kotisatama in facts and figures