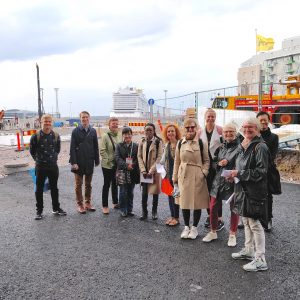 Forum Virium Helsinki has trained guides specialising in the areas of Kalasatama and Jätkäsaari to showcase the architecture and smart solutions of these two rapidly developing city districts.

The guides listed below have undergone a training course organised in collaboration between Forum Virium Helsinki and Helsinki Marketing, as part of which they have familiarised themselves with the districts’ smart city development.

You can reserve a guided tour by contacting the guides directly to enquire about the price of the tour and a suitable time. The typical cost of a tour is approximately €200/1–2 hours. The guides operate as freelancers, setting the prices of their tours themselves and billing their clients directly.

Kalasatama is a relaxed place right next to Helsinki city centre, in the eastern inner city area. In the future, the area’s coasts and channels will be circled by a long coastal promenade, while the central park in the area, Kalasatama Park, serves as a meeting place for all residents. Previously a harbour and industrial area, Kalasatama has been transformed into a residential district of 3,000 inhabitants, with further development underway. The district is scheduled to be fully completed by 2040, at which point it will house 25,000 inhabitants and 10,000 jobs.

The area also serves as a testing ground for experiments in new and smart urban development. Smart Kalasatama is being developed flexibly and through trials in collaboration with the area’s residents, companies, the City and other actors. In addition to this, Kalasatama is also a forerunner of Helsinki’s climate goals. The aim is to create a district that uses resources in such a smart way that residents get an additional hour of free time per day. These developments will also give rise to new urban services, innovations and businesses.

Jätkäsaari is being built on the south-west tip of Helsinki as an extension of the inner city by the sea. Jätkäsaari is a district characterised by a wide range of services, brick and mortar stores, extensive tram connections and functional cycling and pedestrian routes. Jätkäsaari is also an internationally notable traffic hub, the vitality of which is only further increased by the presence of the busiest passenger harbour in Europe. Once completed, Jätkäsaari will have homes for 21,000 residents and jobs for 6,000 people.

Jätkäsaari is also a testing ground for new mobility solutions and a showcase for smart transport to the rest of the world. In Jätkäsaari, new mobility services and technologies are developed in close collaboration with residents, companies based in Helsinki and universities.

Pick a suitable Guide from the list and send a booking request with the form below. We will send You and the Guide an automatic email message and you can continue discussing details via email.

Forum Virium Helsinki is the innovation unit of the City of Helsinki, which aims to build Helsinki into the most functional smart city in the world in collaboration with companies, the scientific community and residents. Follow us on Twitter and subscribe to our newsletter!

Smart Kalasatama, a brownfield district in Helsinki is a vivid Smart City experimental innovation platform to co-create smart&clean urban infrastructure and services. Smart Kalasatama is developed flexibly and through piloting, in close co-operation with 200 + stakeholders including residents, companies, city officials and researchers.