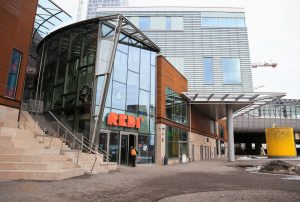 Approximately 1,800 international urban developers have already learned more about the smart urban solutions in Kalasatama. Also CNN and Le Monde, for example, have covered the district of Kalasatama, which is garnering plenty of international interest. Currently, the area is home to Kalasatama Urban Lab, which invites interest groups to develop a smart future city together.

The Smart Kalasatama project has made Kalasatama in Helsinki a model district for smart urban development and a pioneer in the climate goals of the City of Helsinki, where the smart solutions of the city are piloted first. Kalasatama Urban Lab, which opened around the new year, acts as a shared urban development space for the city as well as companies and residents, and offers a place where developers can meet, hold events and network.

“The goal of the City of Helsinki is to be carbon-neutral by 2035, and events at the now opened Kalasatama Urban Lab further this goal. In Kalasatama climate goals are furthered through bold experiments, and the district is an important forerunner for the entire city in experimenting and co-developing a new Helsinki,” says Anni Sinnemäki, deputy mayor for urban environment.

In addition to the City, residents, companies and researchers need to get involved in achieving climate goals, and the new Kalasatama Urban Lab space supports the co-development of these efforts.

“The smart solutions in Kalasatama, such as energy-efficiency and co-development to involve residents have garnered plenty of international attention for the district. Roughly 1,800 innovation tourists attracted by the opportunity to learn more about our experiences have already visited Kalasatama. The sturdy foundation for the Kalasatama smart city district comprises its infrastructure solutions: the innovative pipeline-based waste collection system and smart energy grid. The area has also been a testing ground for new types of services, such as shared-use cars and shared spaces, which we are currently scaling to benefit more people,” says Programme Director of Smart Kalasatama Kerkko Vanhanen from Forum Virium Helsinki.

1. A space for co-creation

Kalasatama Urban Lab is a cosy space where thoughts are free to roam and ideas can be crystallised. Visitors of the space are informed about smart everyday living services and the ongoing development in the Kalasatama area. The space can accommodate 15–30 for a workshop. The space is equipped with whiteboards you can draw on and movable tables and chairs, as well as a separate smaller workshop space with a rotatable touch screen. In the space, you are encouraged to solve climate challenges and utilise digital applications: you can examine and work on a 3D model of Kalasatama, for example.

2. An arena for climate-friendly and smart events

Kalasatama Urban Lab can be used to host public and private events. The space can accommodate up to 60 people, and it is equipped with a large screen, a presentation computer and a sound system. You can also use the large outdoor terrace.

You can see both agile pilots implemented in Kalasatama and the infrastructure supporting smart solutions as well as the new solutions built on top of it. You can experience the most recent climate-friendly and smart living innovations first hand at Kalasatama Urban Lab. The showroom is especially suited for visits by international groups.

4. The ‘super flexi-space’ for independent use

Smart Kalasatama interest groups may reserve the space for independent use through the Flextila service, and gain access using smart locks. The use of the space is also facilitated by further developing additional services and new solutions connected to independent use, allowing for monitoring of the space and utilisation of the data generated.

Smart Kalasatama is part of the Six City Strategy, which develops open and smart city services in the areas of the six largest cities in Finland (Helsinki, Espoo, Vantaa, Tampere, Oulu and Turku). The project has attracted over a hundred companies to engage in collaboration with the City and each other while also raising major national and international interest. The Smart Kalasatama project was granted follow-up funding for 2018–2020 from the City of Helsinki Innovation Fund. The Smart Kalasatama project is coordinated by the City of Helsinki’s innovation company Forum Virium Helsinki.