The aim is to open up underused spaces for residents, utilise various spaces as platforms for experimentation and develop the framework and explore business models of offering spaces as a service. 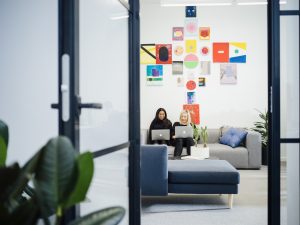 In the Flexi Spaces project that concluded in spring 2018, the City of Helsinki’s innovation unit Forum Virium Helsinki created a model for offering spaces as a service,  that allows spaces to be made available for self service use through the utilisation of digital solutions, such as smart locks and online reservation and payment platforms. Tested in Helsinki’s Kalasatama, the model for opening up spaces proved a resounding success. The lessons learned in the project were published in the Tilat avoimiksi (‘Open the spaces’) publication (in Finnish), which also defined follow-up measures for expanding the utilisation of spaces in the city.

The aim of the Smart Flexi Space Network project launched in August 2018 is to move forward with these follow-up measures. One of the project’s key objectives is to make available spaces more visible and accessible to users, and to develop the model through the demonstration of a comprehensively equipped ‘super flexi space’ that residents and experts will be given the chance to visit.

The project also facilitates the opening up of spaces owned by the City, businesses and housing companies to residents, and involves trying out ways in which different sectors could utilise flexi spaces in their own operations. One of the parties testing these new operating models is Kalasatama School, which will supplement the use of its own teaching facilities with the utilisation of local flexi spaces owned by housing companies and businesses or primarily used by other City units.

Understanding the business models of Spaces as a Service

During the year, the project also aims to increase understanding of the business models of spaces as a service in collaboration with Aalto University. New companies are already offering an increasingly diverse range of solutions for sharing spaces, creating new business centred not only around booking services, but technical solutions, such as smart locking, monitoring usage of the space and security solutions as well. There is also notable business potential in supplementary services, such as catering or cleaning services offered to users and interior design services offered to the owners of the spaces. As such, there is also a clear need for more research based information on space sharing, its resource efficiency and business potential.

The City of Helsinki has made the opening up of spaces a part of its strategy. The measures of the Smart Space Network project facilitate this objective by promoting the resource wise and cost effective utilisation of City owned spaces. The project is a collaborative effort between Forum Virium Helsinki, Aalto University, Granlund Oy and the City of Helsinki Culture and Leisure Division, Education Division and Urban Environment Division. The project is funded by the Uusimaa Regional Council, and it is part of the Helsinki Smart Region initiative, which is centred around urban development and the people-oriented service solutions made possible by new technology.