Kalasatama shows visitors a smart city district of the future 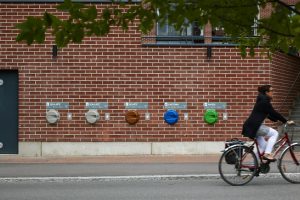 Hundreds of innovation tourists have visited Kalasatama, the smart city district of Helsinki.

Every year, hundreds of innovation tourists visit Kalasatama, the smart city district of Helsinki, guided by guides who are familiar with the district’s smart development.

‘Cities’ new ways of meeting everyday challenges in an environmentally friendly way is a topical issue. The best way to learn new things is to see the examples in practice. Many participants were familiar with the theme but not the name “smart city” itself. What was new to me was that it also included architecture and combating climate change,’ says Fredrika Biström, Coordinator at Svenska Kvinnoförbundet i Sörnäs.

Groups visiting Kalasatama usually tour the area with a guide on foot or on a charter bus. Svenska Kvinnoförbundet’s tour included future energy solutions and an overview of the experiments in the area, among other things.

‘We were shown the solar panels in Sörnäinen, from where we moved to Kalasatama. Our guide told us the story about Sompasauna and the communality of the area, among other things. In addition, we were introduced to the Flexi spaces available for everyone, windows that store the heat from the sun and how dentist phobia has been reduced with VR headsets,’ says Biström. 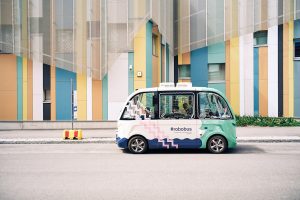 A Robot bus in Kalasatama.

The group moved from Kalasatama to Jätkäsaari, where they learned about modern wood construction, interactive traffic signs and the waste system, among other things. The final stop on the tour was the restaurant Loop at Lapinlahti Hospital, where the group had meals made from food waste and beer made from dried rye bread.

The tour also touched upon the role of Forum Virium Helsinki and the Smart Kalasatama project in the development of a smart city.

‘The tour raised many thoughts about our own neighbourhood in relation to the future of our planet. Architecture and environmental design can do many things. I was afraid that new technology would limit people’s ability to act and influence. It was interesting to see that the smart city mindset in Kalasatama is very human centered / down to earth. Technology can meet human needs, create a good atmosphere and bring people together. It’s not about buying expensive hi-fi devices and downloading more apps. Smart city solves everyday problems and satisfies many needs without creating new ones.’

The smart city visit continued to stir enthusiasm on the topic even after the tour.

‘The visit was also attended by a group from the organisation FDUV, which is an advocacy group for Swedish-speaking persons with disabilities living in Finland. They will continue to work on the subject by building their own miniature smart city!’

Interested in visiting Kalasatama on a smart city tour? Read more about the tours and book a visit here.